Leave a comment | posted in Inside Art, Is it Art?!, Thoughts From RJT 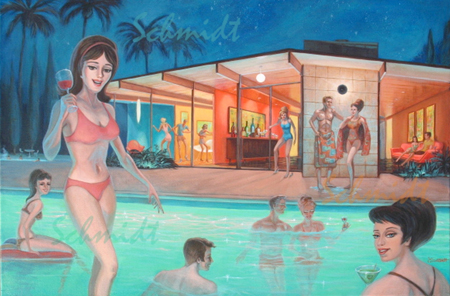 How to Work With People Who Bargain for Art

Q: I get upset when people call or visit my studio or contact me over the Internet and try to bargain me on the prices that I am asking for my art. I price my art fairly at what I think it’s worth and I refuse to negotiate. That’s my policy. The only problem is that I think I’m losing a certain amount of sales. How can I explain to people in a nice way that my prices are reasonable but firm so that I end up selling more art?

A: Art collectors like to feel they’re getting good deals no matter who they are, what they buy or where they’re buying it. Aside from the idea of “getting a good deal,” many potential buyers also have personal reasons for wanting to pay less, such as limited budgets, high cost of living expenses, temporary cash flow problems, and so on. Asking whether a selling price is firm or offering less than full value is entirely normal. As you’ve apparently discovered, if you get rigid whenever this happens and flat out refuse to negotiate, you’re likely to have difficulty moving beyond that point in the conversation. No matter how much convincing do, if someone is set on paying less than full price, the chasm will never be bridged.

Collectors who buy directly from artists often do so because they like being around artists, visiting artists’ studios, seeing how they work, and talking about art. For them, searching for art like this is also somewhat of an adventure; they prefer the thrill of the “hunt” to the more sterile environments of galleries. As with any human interactions, though, they typically gravitate toward artists who they get along well with and who respond to their needs– artists who they feel some sort of connection with. So be aware in advance that inflexibility on any issue, including money, will likely hamper your ability to form good artist/collector relationships, and ultimately, diminish your opportunities to sell art.

Rather than be intransigent when it comes to your selling prices, you might perhaps modify your attitudes towards people who like your art, but who for whatever reason, prefer to negotiate. Consider the fact that anybody who is willing to talk money already likes your art enough to want to own it, and that’s saying plenty. The last thing you want to do in a situation like that is to reject them straight away. At the very least, you have to respect them for having the nerve to step up and make a cash offer. This doesn’t mean you have to tolerate insultingly low offers from people who are simply playing games, who bargain for sport, or who badger you to the point of distraction (the sooner you remove those losers from your studio and your life, the better). But for people who seem to be genuinely excited about the prospect of owning your art, get flexible and give them a chance.

Here are some compromise options and approaches, in no particular order, that might help you to increase sales and ease those tensions over money:

Option 1: If you absolutely positively insist on refusing to negotiate your current prices, raise them maybe ten to twenty percent and then let people “bargain you down” to the whatever you would have been satisfied selling for in the first place. This way you can still be firm, but not look like it. It’s not the best or most compromising way to go, but at least you give the appearance of being open to negotiating.

Option 2: Make every effort to sell to any collector who really loves your art, makes reasonable offers, and who respects you while doing so. These are the ideal people you want to own your art. Reducing an asking price by five or ten or twenty percent is really not that big of a deal when you think about it– especially over the long haul– and often pays dividends in more ways than one. You give your biggest fans the art they want, you get your art out of the studio and into their homes or offices, you essentially enlist them as supporters who will likely talk your art up at every chance they get, and last but not least, you get a reputation as someone who’s approachable and willing to work with potential buyers. Collectors talk about the artists whose work they own all the time, and when they talk about you, you want to maximize the chances that they’ll say nice things and send new people your way.

Option 3: Offer time payments. Let buyers pay certain amounts per month, or pay off balances however they wish within set time periods, or pay by whatever other plans or methods you can agree on. With time payments, collectors feel like they’re paying less. They might also be willing to spend somewhat more since they’re putting less stress on their finances. Draw up simple written contracts whenever you use this option.

Option 4: Accept as many different forms of payment as possible. Offering options to pay by credit card or online by PayPal are pretty close to offering payment plans. This way, buyers aren’t pressured to come up with all the money immediately.

Option 5: Ask whether an interested buyer has anything they’d be willing to trade– either goods or services. You never know who has access to what, and sometimes, a trade can work out far more profitably than a cash sale. You’d be surprised what people have to offer.

Option 6: When collectors bargain you on particular pieces that you simply don’t feel comfortable selling for those lower amounts, rather than reject the offers altogether, suggest other pieces that you’ll sell at those prices. If that doesn’t work, have them point out their favorite pieces and then show similar ones that are priced more within their budgets. Perhaps even show them art that’s slightly more than they can afford, thought not as expensive as the ones they made their initial offers on, and reduce those prices instead.

Option 7: Keep the negotiations open as long as possible and explore as many options as possible. Approach every such encounter like the perennial used car salesman who asks, “What do I have to do to get you into this car?” Assuming the buyer is sincere, sooner or later you’ll figure out a way for them to own your art, and for you to feel good about selling it.

Leave a comment | posted in Advice, Inside Art, Random Thoughts, Thoughts From RJT

The “Marilyn Monroe” work by the renown artist Cameron Gray is stunning.
Composed of hundreds and hundreds of small images you really have to see it in person.  The work is 51″ x 54″ x 4″
Melissa Morgan Fine Art on El Paseo in Palm Desert

Leave a comment | posted in Inside Art, Thoughts From RJT